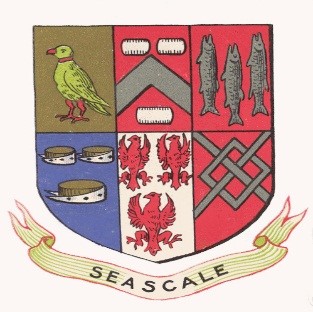 The  Falcon-Steward family were Lords of the Manor of Newton and Seascale.

The three combs are taken from the arms of the Ponsonby family.

The three fish are from the arms of the De Lucy family, the second family to hold the title Baron of Egremont.

The ermine collar is part of the heraldry of the Barons of Egremont.

The three eagles are from the arms of the Eaglesfield family who were subsumed into the Senhouse family of Hallsenna.

The silver on red hatch is taken from the arms of the Huddleston family of Millom Castle.

The name Seascale is thought to be derived from the Norse word SKALI which means ‘hut’ or ‘shelter by the sea’.

Seascale’s history stretches back to the Vikings, being an early Norse settlement.  For centuries thereafter it was quiet farmland until the arrival of the Furness Railway in 1849.  During the 1880’s Seascale grew into a small Victorian seaside resort, famed for its long beaches and easy access by train.

In 1939 with the establishment of the nearby Royal Ordnance Factories, Seascale grew to accommodate the workers.  In 1947 the nuclear building programme at the former Sellafield ordnance factory commenced and Seascale became a dormitory community for the Windscale and Calder nuclear sites (later combined as Sellafield).  In the 1950s Seascale was known as the brainiest place in Britain.

In 1998 the cannon on the sandstone fort was reinstated on a plinth overlooking the beach.  During the Great War it was covered so that enemy war ships should not think that the village was fortified and attack.  During World War 2 the original cannon was removed and melted down as part of the war effort. 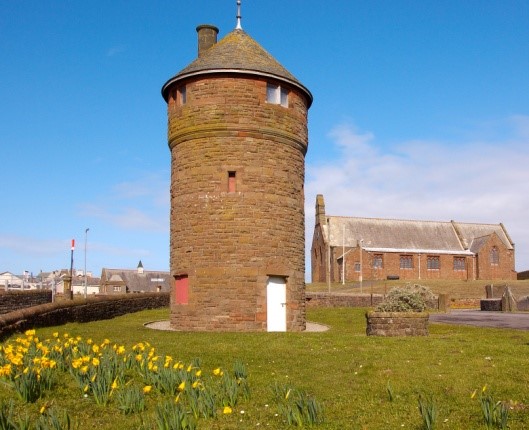 The Grade II listed Victorian Water Tower is the village’s prominent landmark. It was built by the Furness Railway in 1878 to extract drinkable water from a well for the Seascale Residential Estates development plan, which the Furness Railway Board was promoting. They wanted to create a small seaside resort with lodging houses, two small hotels a marine promenade and a pier, in the end it never fully materialised. The [Water Tower] contained a well, a steam driven pump and a storage tank in the roof, the water was pumped from the well to the tank It then flowed down from the tank by gravity and provided water for the Scawfell Hotel, the station refreshment room and the thirty or so dwellings that had been constructed on the estate by 1898.

The present Sports Hall was the railway goods shed was also constructed by the Furness Railway. Its purpose was to ensure goods and items of a higher value could be kept dry whilst transferring them to and from the local carter and the railway vans. (Courtesy Paul Grosse – Historian)

During World War 2 the building came into use as a look out for ‘fire watching’ along the coast.

Seascale Golf Club is a traditional links course, with stunning views across the Irish Sea and Lake District fells.  Founded in 1893 for the Victorian visitors amusement, the 18 hole course is still popular today.  It has been developed to English Amateur Open Championship Course standard, and offers visitors of all golfing abilities the opportunity of a great day out in an outstanding setting.

Seascale Pump Track is a BMX track built to national competition standard by the Downhill Dragon Crew.  There are tracks for both novice and experienced riders, with bumps and ramps.  Next to the Pump Track is a bowling green, cricket field, play area and sports hall.

Seascale’s coastal habitat is home to a variety of wildlife including the common adder.  Adders are mostly seen in Spring and early Summer basking in the sun.  The most striking aspect of the adder is the dark zig zag marking down the back and a Y or X mark behind the head. 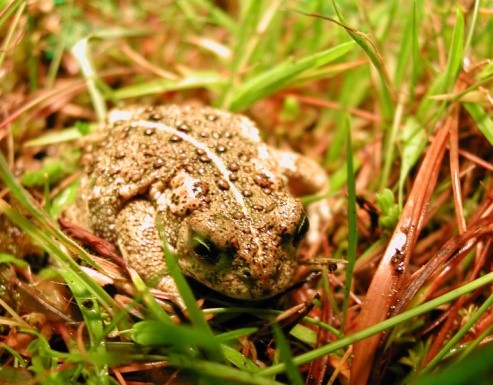 Another coastal resident is the rare and legally protected natterjack toad, distinguished by the yellow stripe that runs down the centre of its back.  The natterjack is known for its distinctive loud croak in the breeding season and its tendency to run rather than crawl like the common toad.

A range of birds can be spotted on the beach at Seascale including the distinctive black and white oyster catcher which has a long orange-red bill and pink legs.  The dedicated wildlife watcher or the lucky few may even see seals and porpoises out at sea.

Spring and Summer are the perfect times to enjoy our coastal flora including the beautifully scented rosa rugosa with its large pink roses and bright green leaves.   Sea kale (or crambe maritime) a native vegetable with attractive white flowers, thrives on the shingle beach.

In easy reach of Seascale are the beautiful fells of the Western Lake District.  To the east is the pretty village of Gosforth and further on the Wasdale valley, home to England’s highest mountain, deepest lake and smallest church.

To the south is the picturesque coastal village of Ravenglass, famed for its Roman bathhouse and beautiful natural harbour.  Nearby Muncaster Castle is an all year round visitor attraction known for its Himalayan gardens, the World Owl Centre and its lively programme of events.  The Ravenglass and Eskdale miniature railway known locally as the La’al Ratty, takes you on a seven mile scenic journey from the sea to the hills.

To the north the coastal settlement of St. Bees is worth a visit.  St. Bees is best known for its Norman Priory, its attractive sandy beach, heritage coast and marks the start of the popular Wainwright’s Coast to Coast walk.  Beyond St. Bees is the Georgian harbour town of Whitehaven, once the third largest port in the UK with trade links all over the world.